Introduction of Fellows initiates $25 Million program in partnership with the Rhodes Trust, as part of $100 Million commitment to drive scientific leadership and interdisciplinary research.

Eric and Wendy Schmidt, in partnership with the Rhodes Trust, today announced the 14 members of the inaugural 2018-2019 class of Schmidt Science Fellows at an event at the Apella Alexandria Center for Life Science in New York City. This unique post-doctoral program focused on scientific leadership and interdisciplinary research is aimed at providing the next generation of leaders and innovators with the tools and opportunities to drive world-changing advances across the sciences and society. 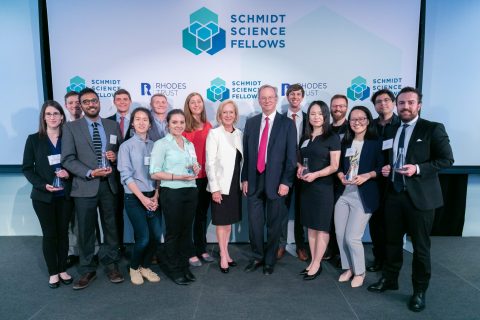 Additional information about the exciting research each of the recipients are conducting can be found below.

“Eric and I have long wanted to find a powerful way to enhance the development of some of our world’s most promising scientists and technologists, to help them become our next generation of leaders,” said Wendy Schmidt, President of The Schmidt Family Foundation and Co-founder of the Schmidt Ocean Institute. “Following their Fellowship year, this cohort will be equipped to drive new discoveries and to pioneer strategic approaches to the challenges we face for human and planetary health. We know they will move forward faster and in a more collaborative fashion than possible in previous generations. Congratulations to the first class of the Schmidt Science Fellows.”

“The next frontiers of scientific discovery will be pioneered by those who can transcend the traditional boundaries of science, using techniques from multiple scientific fields to tackle society’s longstanding challenges,” said Eric Schmidt, technical advisor to Alphabet, Inc. and former Executive Chairman. “The first class of Schmidt Science Fellows have the intelligence, inspiration, and ambition to be leaders in science and society. We at Schmidt Futures look forward to helping them realize that potential.”

Through an initial commitment of at least $25 million for the first three years, this innovative fellowship is the beginning of a broader $100 million effort by Eric and Wendy Schmidt to promote scientific leadership and interdisciplinary research over the next decade and beyond.

The experience, conducted in partnership with the Rhodes Trust, home of the prestigious Rhodes Scholarships, will place Fellows in a new research environment immediately following the completion of their PhD studies, in order to encourage an interdisciplinary scientific mindset. By working in a prestigious research lab outside of their existing area of expertise, each Fellow will be exposed to new science and technology, novel ways of thinking, and a broader network of colleagues who can help guide their success as leaders. The selected Fellows, whose areas of study span the natural sciences, engineering, mathematics, and computer sciences, will also each receive a stipend of $100,000 as part of the program.

“The Rhodes Trust is delighted to be a partner in enabling the Schmidt Science Fellows to have been transformed from a terrific idea into a vibrant community,” said Sir John Hood, Chairman of the Rhodes Trustees. “The first cohort of Fellows will be true pioneers and we eagerly look forward to seeing what they will accomplish – both individually and collectively.”

In addition to the post-doctoral placement, the program will also feature five weeks of high-level courses and experiential workshops that will explore a diverse range of scientific advances, conversations with some of the world’s preeminent scientific and societal leaders, and immersive leadership experiences that will help Fellows build support for their future work. These weeks will be hosted by several of the world’s leading universities who have partnered with the Schmidt Science Fellows program, beginning at the University of Oxford in July 2018.

In addition to the universities that will host Fellows over the course of the program, numerous other leading research universities around the world are also participating by identifying the exceptional candidates that have received the fellowship and hosting the Fellows in a variety of cutting-edge research laboratories for their post-doctoral year.